Hunt Hill is unique in that it protects many habitat types found in Wisconsin. AND, none of the habitats are more than ½ mile from the main campus!! Read below to learn more about our bogs, lakes, meadow and forests.

Hunt Hill has two sphagnum bogs. One bog is located directly on site and features a ‘bog walk’ that visitors can use to walk out into the bog for closer examination of the unique plants.  Some of these unique plants include: rose pagonia, grass pink, arethusa, and pink lady’s slipper orchids, the pitcher and sundew insectivorous plants, wild cranberries, tamaracks, and, of course, sphagnum moss!

A second bog, Dory’s Bog, can be found 2 miles from our main site.

Dory later (in 1963) gifted the 35 acre area now known as Dory’s bog to the National Audubon Society as part of the Hunt Hill property.  In 1974 it was dedicated by the Wisconsin Scientific Areas Preservation Council as State Scientific Area #116.  The original acreage did not provide complete protection of the entire bog, so efforts were made to acquire approximately 40 additional acres surrounding the entire bog: and that has since been accomplished through efforts of the Friends of Hunt Hill. Dory’s Bog has been the subject of several research projects (plant survey, bird survey, and a master’s degree study of nutrient use by black spruce and tamarack), as well as various group visits.

Hunt Hill’s property surrounds two glacial lakes, Upper and Lower Twin Lakes. These lakes were originally created when a large chunk of glacier broke off and sediment was deposited around it. This formed our lakes and created a large ridge (where camp now stands). Today, we find that Upper Twin Lake has spots as deep as 44ft and Lower with spots at 37ft deep.  There is also a very shallow and narrow channel (canoe accessible) through which we have access to Big and Little Devil’s Lakes.

There are two footbridges on our property. The newest bridge, the Nordskog bridge, is located along the edge of Big Devil’s Lake and our channel. It offers beautiful views and can be accessed by walking along the Bear Trail. Our second footbridge is also found on the Bear Trail but on the very opposite end of the Twin Lakes chain.

We have a waterfront area that serves many purposes. In addition to our swimming area, it is also our canoe launch site, ponding and lake laboratory (pontoon) area.  Cabin renters are allowed access to canoes and, if a group of people are interested in swimming, we can arrange for a lifeguard to be onsite. *Swimming is only available with a Hunt Hill lifeguard present and must be arranged ahead of time.

While Hunt Hill is located too far north to appropriately be called a ‘prairie,’ the old 40 acre hay meadow of the original farmstead is being allowed and encouraged to revert to native flora and fauna. Prairie burns are conducted periodically, as weather allows, to encourage the native perennial plants while discouraging succession to a forest habitat.

Several miles of rolling mown-grass trails follow the outside perimeter and cut through the center of the meadow, allowing excellent access for hikers of all ability levels. Along the way are nature trail pedestals, made possible in part by a grant from WEEB, which highlight some of the area attractions.

We also host a bluebird trail which has over 25 nest boxes and is managed with the help of BRAW and Hunt Hill staff and volunteers. Since implementing the bluebird houses, we’ve seen fledgling numbers maintain a healthy level. The birch tree posts installed along the mown paths are essential 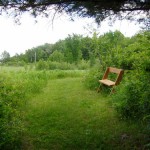 hunting and perching posts for bluebirds.

In addition to bluebirds, many other birds, butterflies, dragonflies, wildflowers and lots of other wildlife can also be observed “…up close and personal.” A gas-powered golf cart for touring the prairie can be reserved for the elderly or disabled.

Photographers frequently walk the edges between prairie and woods, or go to Heron Point on Lower Twin Lake for spectacular sunsets and glimpses of some of our more reclusive inhabitants – indigo buntings, golden-winged warblers, otter, sandhill cranes, green herons, basking turtles and beaver. More frequent and favorable sightings occur at dawn and dusk.

Our forest comprises approximately 80% of our on-camp acreage and includes dry-mesic forest and upland hardwoods.  Much of the adjoining uplands are also second-growth hardwoods.  Those hikers with a keen eye, may also spot the lady slipper orchid and rattlesnake plantain which grow along our trails.

Hunt Hill itself is the location of one of the oldest forestry studies still being conducted in the state of Wisconsin.  The thirty original forest study plats were set out in 1933 by University of Minnesota graduate student, Willis Eggler, through the assistance of Aldo Leopold.  Randomly scattered through the forest, you’ll spot their current locations (yellow-topped steel fence posts) as re-established by former Hunt Hill staff member Dr. Lucy Tyrrell, currently Research Administrator of Denali National Park. Eggler’s study will take hundreds of years to complete as researchers watch, survey, and analyze the probable transformation into a climax basswood/sugar maple forest.

Watch along the hiking trails for old charcoal remnants of trees caught by forest fires – the most recent was in the early 1930’s.  Old pine stumps often bear the black scars.  Along the Red Oak West Trail a large old white pine shows charcoal inside the tree in a hollow on the north side base of the trunk.

Across the hills one will find dozens of large old white pines – too small to be harvested back in the 1800’s – now so big that two grown adults can’t touch their fingertips around the base of the trees.  They tower far above surrounding deciduous old-timers, and are readily visible from surrounding lakes.  Some are nest sites for bald eagles and owls.  At the switchback on the Red Oak West Trail, you will find the best examples in a grove forgotten – right next to the glacial kettle.

Due to the uniqueness and some of the rare plants that can be found on the property, much of the west portion of the Audubon property is also designated State Natural Area #116.